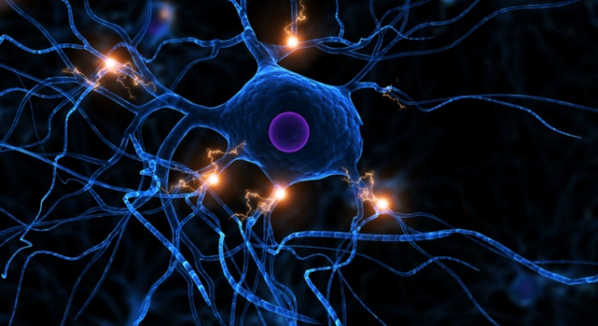 Myelin is a fatty sheathe around the axon – the part of the neuron that carries signals out from the cell body. Just as neurons form new connections as we learn, so the brain adds myelin to axons. Special cells called oligodendrocytes wrap myelin around the axons that carry the heaviest traffic. Each wrap causes the signal to move faster.

This improved speed helps us to think faster. This applies to all forms of thinking – logical deduction as well as muscle movement. That isn’t always a good thing – we’ve all heard the term “motor mouth,” somebody who talks faster than we can follow. To correct for such problems, myelin gradually decays, slowing the speed along the affected pathways. To maintain optimum performance, then, myelin must be constantly restored.

Building optimum performance is the subject of The Talent Code by Daniel Coyle. The book sings the praises of myelin and the processes that refine its placement. The most heartening insight is that talent – broadly understood to be the capacity to respond rapidly and precisely – can be cultivated through proper training.

Both internal attitudes and external feedback (coaching) figure in the development, refinement, and maintenance of myelin networks. Attitudes include commitment, caring, challenge and consequences. Commitment is recognized as the belief that a life will be built around execution of our skill. Caring manifests as an emotional response to competence: irritation at failure and joy in achievement. Challenge is the restless seeking beyond current skill – to always be in pursuit of greater aptitudes. Lastly a demonstrable connection between skill and social recognition is the honey of consequence that draws others into challenge with us, giving us the stimulus to continue to improve.

Coyle sees these factors at play in many settings: sports, music and academics are highlighted. While explicitly considered only in the afterward, every example highlights the value of tension between creativity and discipline. Creativity is the goal, but can be cultivated only when the student believes that what she does makes a difference. In the proper setting, then, negative feedback becomes a positive when self-awareness (shame or guilt) is followed immediately with repetition that is rewarded with approval when competence is achieved.

From this, it is clear that mentors are critical to the development of mastery. It’s not a one-size-fits all proposition. In the early stages of talent development (what Coyle calls “ignition”), the mentor must build an emotional connection between the student and their skill. As mastery is approached, the mentor creates conditions of constant challenge. Performance is driven by practice with others of high skill, and the mentor intervenes mostly to help the competitors leap-frog past each other.

In this pursuit, myelination alone is insufficient. In a competitive setting, mastery is not repeatable, because competitors will adapt to its demonstration. This requires endless variation that can be achieved only by composing smaller elements as sequences. Part of coaching is to break skills down into chunks that can be creatively sequenced. Coyle illustrates this with a detailed breakdown of how a master coach teaches a quarterback the drop-back. The most telling proof of the principle, however, is in the failure of chess masters to recall random board configurations, where they can instantly recall actual game configurations. The chess master sees actual game configurations in “chunks” of related pieces.

While hypnotherapists are not life coaches, the insights of The Talent Code are critical to our discipline. Emotional attachment is the foundation of excellence. Hypnotic rehearsal builds myelin networks in the brain, but must be tied immediately to myelination in the rest of the body. Habits are best maintained under variations that instill challenge, and best undermined by substituting alternatives to feed higher behaviors. Recovery from loss may be facilitated by seeking actively to tie high-level networks to new contexts for expression (“chunking-down” instead of “chunking-up”).

Perhaps most importantly, however, is in managing client expectations. Learning is not life-long – it must be actively maintained, and constantly evolves as others adapt to our capabilities. In fact, that tension is critical to skill. The subconscious may resist change, but great accomplishments derive from the struggle to overcome that resistance. In some sense, the properties of the myelin system are how the brain comes to understand what is really important to us.