For two years, I attended Saturday Torah study at the Reform congregation in Westlake Village, Adat Elohim. As we struggled through Genesis, a recent college graduate plead for her sisters, “What does this have to do with women?” I leaned over and whispered in her ear, “This is all about men’s problems.” 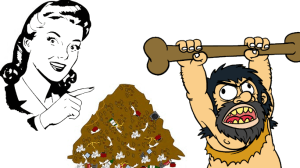 When constructing my exegesis of the Christian Bible, I chose a rather primitive image for the male condition. Reflecting on Ronald Reagan’s admission that “without women we’d still be living in caves,” I offered this pastiche.

But that was to lampoon the human condition. A more nuanced view followed. In conditioning us to receive love, the Divine Will must do two incompatible things: change us to serve the needs of others, and provide what is necessary to sustain us. The masculine tendency is to change; the feminine tendency is to sustain. They are complementary personality traits, not tied to the physiology that makes us male or female. In maturity, we express those traits that in each moment serve to make life marvelous.

This is the orientation that I brought to my reading of Rachel Wooten’s “Tara: The Liberating Power of the Female Buddha.”

Wooten was born into Judaism, but studied for her doctorate at a Jungian Institute that had adopted Tantric Buddhism. Through dreams and guidance from her Rinpoche, she adopted Green Tara as a deity. Her career as a therapist and counselor has melded those threads.

Wooten traces the origin of Green Tara back to Samaria, but the myth of Wisdom Moon resonates most vibrantly with her feminism. Wisdom Moon was a female bodhisattva (enlightened Buddhist) in an ancient era, who was advised by male teachers that in order to complete her ascendance she must re-incarnate as a man. Wisdom Moon countered that she would prove them wrong by ascending as a woman. Through her devotion to those that she inspired, Wisdom Moon became Green Tara. In Tantric Buddhism, she is the supreme deity, containing all things and radiating infinite strength.

In the same way that I suggest that the Divine Will accommodates our limitations by adopting masculine and feminine tendencies, the deities of Tantric Buddhism have manifestations. These are twenty-one in the case of Green Tara. Manifesting on the color scale as shades of red, ranging from black all the way to white, each manifestation responds to a particular psychological need, allowing us to sustain our commitment to participate in the liberation of all living beings from the negativity that divides us. The darker colors are described as “wrathful” or “angry” (I would prefer “passionate”) and dispel negative influences. The lighter colors tend toward “peaceful” and condition us to receive positive energies.

The ordering of the presentation follows the Tantric praises of Tara, according to a plan that eludes me. Each chapter starts with the name of the manifestation, a declaration of virtue such as “Saffron Tara Who Moves the Three Worlds.” A brief paragraph suggests the occasions that would be most propitious for her invocation, characteristically psychological or physical weakness, social conflict, or despair of the world. Wooten then offers inspiration, celebrating the virtues of the manifestation, mixing natural metaphors with personal and professional history. Each chapter concludes with a mantra and visualization for invocation of the manifestation, and the sequence of intentions to project when interacting with her.

In integrating these inspirational writings, I could not always determine the boundaries between Jungian psychology and Tantric teaching. For example, reflections on mortality and loss appear more than once, shaded with different nuances of focus. More challenging to the male reader, all the case studies involve women. This includes the broad social challenges of suppressed female ambition and sexual enslavement, all of which are laid at the door of masculine negativity.

That said, I am sympathetic to Tara as a manifestation of the feminine principle. Wooten does not ascribe any goals to the reader, except to receive support to sustain her in reaching for enlightenment. Each of us has unique gifts to offer to the world. Tara is the perfect source of sustenance for us, dispelling external factors that impede us while empowering us to recognize what is good. I just wish that Wooten would allow some space for masculine virtue. Perhaps that is a step for her successors to take.

For the hypnotherapist, I am confident that this work will enrich the language and imagery we use to encourage clients that feel overwhelmed by circumstances. At the end of the book, Wooten provides a summary table of the manifestations. This key is a valuable guide. Its omission would leave us with an unwieldly compendium.

To summarize, Rachel Wooten’s “Tara: The Liberating Power of the Female Buddha,” is a powerful and heartening celebration of feminine virtues. In navigating its encyclopedic exploration, we might be well served by an overarching theory. As it is, the thoughtful mental wellness practitioner will recognize those they heal in Wooten’s rich vignettes. Hypnotherapists may particularly benefit by exploration of the imagery and language that Wooten uses to celebrate the individual and collective virtue of Tara’s manifestations.