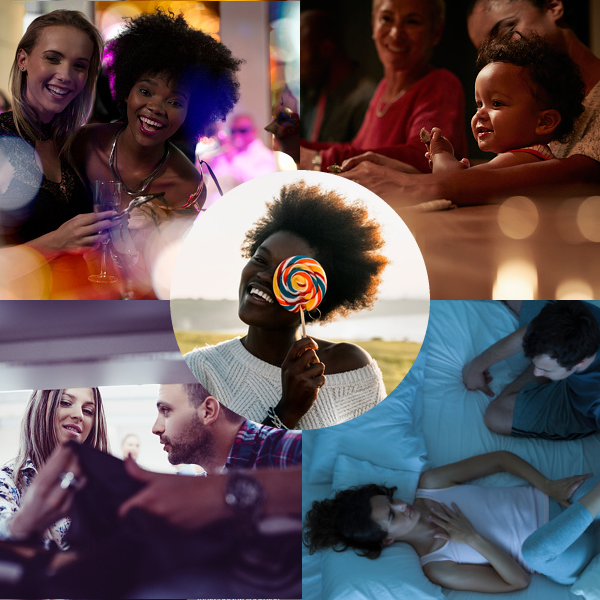 In the NICABM course on Trauma, Thema Bryant-Davis explains that disadvantaged, ethnically recognizable minorities suffer from dissociation, a distancing from the signals they receive from their own body. Living among a majority that cannot read their facial expressions, the minority is constantly wondering “What will they think of this?”

At least in modern America, women seem to qualify as susceptible to such trauma. The size of the cosmetics industry is sufficient evidence. And while we might doubt that men are free from dissociating social pressures, biology has fundamentals. In the animal kingdom, mammalian females are not always available for mating. A female in heat uses crude signals to attract attention. We have clothed those, the most outre now being a flashy display of cleavage. If a woman craves sexual attention, she must adorn herself in a way that pleases men.

Given the power of the sex drive, I cannot fault arguments that separate spaces are essential to civilized pursuits. Ancient religions required this, and it lives on in sports and scouting. Culture has its own pressures that drive cross-pollination, however, not least being human curiosity. Individuals will seek to cross over, and as they benefit, social expectations will change.

This is the context for my encounter with The Feminism Book, part of DK’s series on Big Ideas Simply Explained. I have found the series valuable in tracing the history of ideas and society. In free market societies, we specialize, forming disconnected cultures. The Big Ideas series bridges those gaps with integrity, not proselytizing for one position or another, but revealing the historical bands that tie us in our separate corners.

As a therapist my role is to unify perspectives, and in that regard this book was enlightening. As a man, however, it was challenging. The motivations of the highlighted feminists are grievances against my sex.

The story has two parts, divided about the time of my birth when birth control pills became readily available. Prior to that, feminist writings were concerned with fairness and essential rights, with grievances claimed as universal. After that time, the writings shift toward cultural critique, with successive commentators inspired by personal history.

The first era was dominated by educated women. While in that age women were typically denied public authority, acumen was essential to the management of households and estates. A certain class of woman was expected to receive an education, and among them were those whose sophistication surpassed that of men of lesser talent. To be denied a political role was justifiably galling.

Was their compassion universal? No. Among the American suffragettes were those that resisted granting of the vote to freed slaves. But universally, all found the self-interest of men to be the root of oppression. Nowhere in Feminism is it suggested that their stay-at-home sisters might have resisted the expansion of responsibilities into the brutal and opportunistic realm occupied by men.

In organizing to achieve political power, the early feminists bridged national and class distinctions. Their writers were few in number, and a rich dialog evolved regarding the legitimacy and feasibility of claims to social opportunity. Many hitched themselves to international movements perceived as liberalizing (including political dogmas that stoked violent rebellion) only to be disappointed when they were passed over during social restructuring. One way to judge the integrity of male revolutionaries is from their loyalty to their sisters.

The integrity of this first era is evident in the steady fracturing of the movement into streams representing the specific concerns of ethnic and class sectors. If opportunity is the goal, other factors than sex come into play, and in charting the fragmentation of feminism we can gain insight into the breadth of those factors, even if in feminist arguments they are secondary to male culpability.

With the rise of sexual liberty in the second era, the tenor of the conversation shifts. Where once it was assumed that a woman who indulged her needs would be responsible for children, women were now presented with sexual freedom, and the self-gratifying male assumption that women should be sexually available.

The decoupling of sex and maternity also drove the collapse of social spaces, requiring that the sex drive be brought under control. This issue dominates feminist dialog since the ‘60s. The more extreme positions include political lesbianism. The more cynical include punishing successful men for sexual impropriety when some such as Nancy Davis openly slept their way to the top of the entertainment industry. Women looking on from the outside seemed to think that men sought power for creative purposes, when in fact sexual opportunity was a major driver.

This era has its own fragmentation, the flywheel being the nuances of sexual preference. Again, the enumeration of grievances splits the priorities of the movement.  Woman’s studies having gained academic acceptance, original voices tread a circuit of book and speaking tours. Novelty has more value than synthesis.

To be direct: what I found of greatest lack in the collected summaries is any sense that women are concerned with articulating the conditions of their contentment. In my experience, that arises from complementarity. I occasionally find myself simply stunned by a glimpse of feminine grace, recognizing it as something that I would sacrifice myself to protect. There are times in a woman’s cycle when she seems to know peace, something that as a man I did not know until about fifty when my handle stopped its constant aching.

My own struggles have made me reticent to enmesh a woman in my life, and I have been voluntarily celibate for twenty years. That has been a compounding problem, with influential women making it clear that I will be denied social and financial success until I get myself attached. Paradoxically, I find myself being beaten up for taking the feminists at their word: we should all be judged according to our merit, rather than according to our romantic partner.

So as a therapist, where this book left me is confirmation of my belief that dichotomies are sterile. Feminists themselves recognize class, ethnicity, and education. In my discipline, Kappas was a successful marital counselor because he recognized that sociability differentiated people of the same gender, and to this I have added nurturance. In my practice, redirecting dialog into those channels has thus far been a successful strategy for avoiding unproductive enumeration of grievances – particularly when those grievances are rooted in the difficulty of controlling urges that originated hundreds of millions of years ago. That kind of self-control originates from mutually rewarding compromise. Feminism without a corresponding masculinism is going to continue to be a frustrated movement.