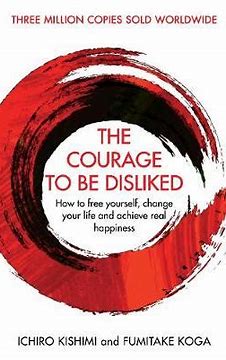 I can’t remember a book self-identified as philosophy rising onto the US best seller list. It says something about Asian society that The Courage to be Disliked, an examination of Adlerian psychology, remained on the regional best-seller lists for over a year.

The authors – Ichiro Kishimi and Fumitake Koga – hew to the original philosophical mission – to encourage the “love of wisdom.” Philosophies survive because they improve the lives of those that embrace them. That The Courage to be Disliked was embraced by Asian society reveals as much about Asian society as it does about Adlerian psychology.

Adler’s thinking is traced back to Socrates, and the format of the book parallels Plato’s rendering of the Socratic dialogs. But where The Republic describes Socrates in dialog with a diverse community, Kishimi and Koga’s dialog concerns the enlightenment of a solitary young man in partnership with a senior sage. Why the sage should be so drawn to the dialog is a mystery resolved only by inference. The youth is contentious and abrupt. But he has an endearing earnestness that is touted, at the end of the book, as the critical feature for living a meaningful and contented life.

The dialog begins with a distinction drawn between Freudian and Adlerian schools of psychology. Freud is critiqued for a focus on etiology – a concern with causes. Adler is focused on teleology – a concern with meaning. At the beginning of the dialog, the youth is trapped in etiology. He catalogues his “insurmountable” defects and their causes. Through the course of the dialog, he is eventually liberated from that view to the realization that his mind is not damaged, and so he can choose his goals and priorities.

The steps on the intellectual journey are not complicated, and the book is drawn out in exploration of the youth’s objections. The sage is guiding him through a change of world view, and any such process is impeded by the realization that each surrendered assumption undermines strongly-held beliefs and behaviors. A reader caught in the etiological trap might benefit from complete consideration of the work. Here I outline the steps in their bare form.

The man living in isolation knows no interior conflict, so all interior conflict must arise from relationship. The origin of those conflicts is formed in the predisposition to compete with our fellows. Adler recommends that we see our fellows as comrades. Rather than individual happiness, we should seek “communal feeling.”

In sustaining that harmony, we must not burden our comrades with our choices. Each of us has “life work” – examination of the behaviors that frustrate our interior harmony. Often that involves recognizing the conditioning – reactive behaviors as well as philosophical assumptions – instilled by parents and society.

But it goes further than that. Comrades engage shared goals, and in doing so attach one another to realization of contentment. Part of sustaining fellow feeling is to protect ourselves from such attachments. To assist us in that goal, Adler offered the concepts of vertical and horizontal relationships. Vertical relationships involve judgment and assignment of value. Horizontal relationships are organized around communal feeling. We are encouraged to surrender judgment and serve our comrades.

The challenge is that we are embedded in a society of judgments in which the behaviors espoused by Adler are self-sacrificial. Adler’s response is that no contentment is possible when we play the unstable game of dominance built around vertical relationships. In those systems, we are always under threat from our competitors. The only path to contentment is to choose to act in ways that we believe serve our chosen comrades and have faith that they will reciprocate.

The book closes with the observation that success arises in being earnest and attentive (concerning the second, Kishimi and Koga use “living moment-by-moment”).

To critique this framework, we must return to the structure of the dialog. The youth is highly rational and self-aware (qualities that Freud deemed necessary to supply). Both live in a middle-class culture. Both partners subscribe to a spiritual vacuum, which feeds the sense that they are alone in their struggle.

What is missing is any sense of the social dynamic of reciprocity, obvious to those in an agrarian or religious culture. The opportunity of living earnestly in a society built around dominance is that comrades rally around us when we are endangered. Even those that rise to the pinnacle of dominance come to rely upon us, and so hesitate when confronted with the choice to destroy us.

We know our virtue by the witness of the world. This is the foundation of Zen Buddhism with its concept of no-self and co-creation. It is the insight that motivated Pharaoh to elevate Joseph as viceroy.

I do not know to what degree Adler was constrained by the perspective of the youth and sage in The Courage to be Disliked. Not being an expert in his thought, I must refer to my own framework – the Hristic Path. In the book, we confront a youth denied the opportunity to enjoy life. He lives at the boundary between Survival and Sex. The sage offers lessons that support a transition to Partnership but fails to honor the spirituality essential to Creativity and Imagination.

Through the lens of the Hristic Path, the tortured dialog of the second half of the book seems to avoid the joys of creativity. I am moved to celebrate George Bernard Shaw, who observed that “The one true joy in life is to be used by a purpose that you believe to be a mighty one.” A purpose has a direction and goal. Adler’s prescription that we surrender both past and future isolates us from the deeper source of meaning. That meaning is instilled in my observation that humanity won the evolutionary struggle because we learned to give and receive love. As Jesus observed, live that principle and “all the Law and Prophets follow.”

In my assessment, this book will be most valuable to readers with a protective sociability, and even perhaps leaving the Adventurer cold. The Adventurer is not concerned with proof – they take action and trust in their capacity to heal. I think that the timidity of the youth will leave them mystified. Seeking happiness in life? Go out and get laid!