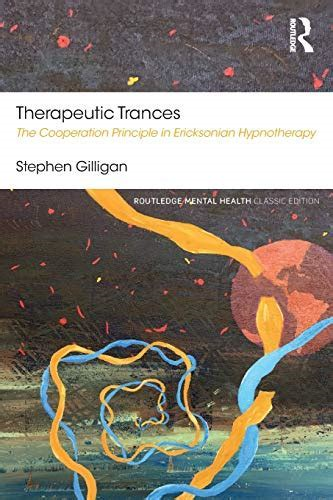 Milton Erickson, the mid-century guru who revived academic interest in hypnosis as a therapeutic tool, was inspired to his studies by his recovery from polio. As he retold it, Erickson recovered the ability to walk by studying his baby sister as she learning to take her first steps. Having plumbed the depths of the mind down to primitive motor control (something the healthy take for granted in adult life), he realized that many of our problems originate in self-limiting behavior patterns. Erickson spent the rest of his life learning how to remove the barriers that prevent us from changing, discovering a mental state that he called “trance.”

Gilligan is not the first to write on this topic but brings a refreshing humility to the subject (this as compared to the author of the forward, Zeig, who claims to have surpassed Erickson). The book is full of self-deprecating stories from Gilligan’s internship with Erickson, mostly relating to the futility of applying analysis to methods departing from the proposition that every mental imbalance demonstrates a strength to be tamed and refocused.

In this evolution, Erickson recognized waking and trances states, dominated respectively by the conscious and unconscious minds. The conscious mind is held as oppositional, and so we have one principle of trance: to depotentiate the conscious flow. Once trance is established, we progress to cooperation with the unconscious as it explores perceptions and responses. The role of the therapist is to guide those explorations along self-valuing pathways.

Gilligan emphasizes from the start that Erickson had no patterned practices. The only structured method is a survey of positive associations to anchor progress to self-valuing Self-devaluing is seen as a hypnotic habit, relatively easy to disrupt once the self-valuing alternatives are presented. Erickson persistently asserted that the client reveals such strategies through interpersonal trance – a joint state whose integrity depends upon the surrender of the therapist to the success of the client. In my experience, the client discovers solutions to internal conflict by learning to merge harmoniously with the minds of others. The therapist simply bears witness to that resolution.

Within this framework, the therapeutic challenge is principally to achieve trance at sufficient depth. This is the bulk of the development, and it is here that I must depart from Erickson’s thesis.

Gilligan emphasizes that mastery of dissociation requires dedicated practice. Vignettes include transgressions of public propriety, such as practicing non-sequitur inductions on waitresses. As well as cultivating glibness, for hesitant clients the therapist must carefully study thought patterns, which may be amplified until the conscious mind is overloaded. Gilligan cites two to six sessions as common before the client can develop a satisfactory trance.

In Kappasinian hypnotherapy, what Erickson terms “trance” is the natural state in childhood. The conscious emerges around eight years of age under the pressure of conflict between family and social expectations for our behavior. In this view, trance is recognized as a recovery of our natural, integrated being.

What we recover in that state is full access to the learning processes at the earliest stages of life: sensory processing, digestion, motor control, speech, play, and emotional regulation. Erickson, paralyzed in bed as a teen, plumbed these depths in learning to walk again. It was here that he discovered the power of the integrated mind – and perhaps was allowed to enjoy interpersonal trance by his little guide. The power of Kappasinian theory is we have a map of the territory: the developmental sequence described by Eric and Joan Erickson, and the split between conscious and subconscious realms that paces the evolution of adult behavior.

Kappas would have benefited from dialog with Erickson in that the former’s cultural and professional orientations were to authoritarian methods. (Gilligan’s elaboration of this distinction is valuable). The authoritarian tendency was not limited to hypnotherapy; Freud also held that the therapist was responsible for analysis of the client’s condition. Both practiced in a context of limited psychological sophistication, while Erickson surrounded himself with academic collaborators.

Having been exposed to both Erickson and Kappas in the development of my skills, I modified the Kappasinian inductions to celebrate the collaboration between conscious and subconscious. Clients attain depth in the first session, principally because the subconscious recognizes that better communication is essential to self-fulfillment.

I recommend this book highly to practicing hypnotherapists. Erickson’s collected papers (Rossi) are documentary, and do not attempt to describe his experience of interpersonal trance. In transmitting these teachings, Gilligan does a great service to the discipline and Erickson’s memory. The clarification of the principles of trance formation also highlights the importance of theories of psychological development in preparing clients to marshal their mental powers for healing and personal growth.