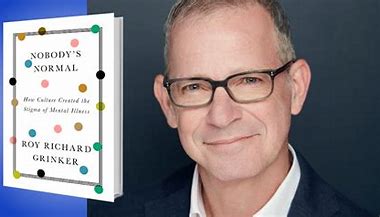 The human brain is a complex, organic, continuously evolving system. For those suffering mental conflict, this has practical consequences for the healing process. Complex: nobody can tell you exactly why you are suffering or how to recover. Organic: as it evolves, the parts of the brain compete for resources and thus what seemed important in the past can frustrate our ambitions in the present. Evolving: with trust and patience, your brain can restore its internal balance.

Among all the vignettes in Roy Grinker’s “Nobody’s Normal,” I was encouraged particularly by a Harvard study that sought to profile a “normal” male youth. When the sub-population was identified, the faculty recognized them as the least inspiring students. To be blunt, they were boring. By implication, the creative mind should reflect on the athlete’s maxim: “No pain, no gain.” When we go out to explore new mental territory, we get owies. That doesn’t mean that our brain is broken.

Grinker’s book shares much with other exposes of psychiatry. Here I have reviewed Harrington’s “The Mind Fixers,” van de Kolk’s “The Body Keeps the Score,” and Mate’s “In the Realm of Hungry Ghosts.” Grinker’s is distinguished by its intimacy. His grandfather and father were central figures in the development of American Psychiatry, including serving as President of the APA. His father fought to defend the needs of the patient as psychiatry passed through therapeutic fads. Grinker, groomed as a successor, was brought into these controversies, insights that allow him today to counter the group-think cultivated by the victors. Grinker’s convictions are deepened by his experiences raising a child whose development was not accommodated by institutions optimized around the “normal” child. Both histories empower Grinker to a criticism of psychiatry’s tendency to disempower patients with the idea that their brains are broken.

Grinker softens his critique with anthropology. The superstitions of tribal cultures often motivate them to rally in support of relatives struggling with emotional and mental distress. This was common in Europe until the spread of wage labor (labelled erroneously by Grinker as “Capitalism”). As families fragmented, the undesirable worker was left to fend for themselves. Becoming a public nuisance, they were collected – the criminal along with the physically and mentally disabled – in asylums that used barbaric practices to bring residents to their senses. As those methods evolved, caretakers recognized a spectrum of behaviors, from those that were capable of negotiating their terms of care to those whose behaviors in every way failed to reflect their treatment. The former were clearly incorrigible and housed in prisons. The latter were subjected to scientific study.

Much of “Nobody’s Normal” focuses on the difficulty and hypocrisy involved in sorting people into hospitals, sanitoriums, and prisons. Prior to the advent of methods for diagnosing mental wounds, a mind in need of rest could realize that goal only by manifesting physical incapacity – disease or disability. This put many of the mentally ill into hospitals – unless they were slaves, in which case they were considered “malingerers.” As psychiatrists noticed the similarities in presentation among their patients and combat veterans, 20th century military planners concerned with maximizing combat readiness commissioned clinicians to help rehabilitate those suffering from mental wounds – until war ended and the long-term costs of rehabilitation became evident. Hoping in WWII to select only the mentally resilient, the armed forces developing a rating system that was extended in the field for rehabilitation. After the war this ranking system became the foundation of the DSM. Despite this, civilian clinicians ignored the insights of military psychology during the Vietnam War. This was unfortunate, because the inability to predict resilience under combat might have helped to soften the diagnostic certainty that bedeviled “schizogenic mothers,” children whose impatience in the classroom was controlled with Ritalin, and adults whose warring hemispheres (or so the theory went) were separated with an ice pick.

From this history, Grinker reaches the beneficial conclusion that both the clinical categorization of behavior and treatment of disability are driven by economic and institutional concerns that have little to do with the functional potential of the individual mind. He classifies these social biases as “stigma.” Having identified them, Grinker turns to the heartening work of documenting how a focus on functional potential benefits both the individual and society.

The concluding chapters of “Nobody’s Normal” build the case that destigmatizing social awkwardness and treatment creates new social opportunities. Even so little as conveying intelligence as an evolved trait, rather than a congenital one, liberates students to greater achievement. Concerning treatment, Grinker promotes electroshock therapy, which he argues has evolved beyond the crude forms that traumatized viewers of “One Flew Over the Cuckoo’s Nest.” And he conveys the benefits of cultivating work for those whose expectations have been humbled by social rejection. In the case of autism, the high-tech and financial industries now curate positions for this population, valued for their powers of concentration – and emotional immunities that mitigate against burnout.

My critique of Grinker’s program is muted. I agree whole-heartedly with the proposition that sufferers of mental disease should be encouraged to believe in their natural healing powers. Indeed, as a hypnotherapist, my professional obligation is to protect the subconscious from attack under the prevailing science that holds a cry for relief as justification for chemical assault. As a mystic, however, I am concerned that Grinker does not appreciate the spiritual consequences of electroshock therapy – consequences hinted at by the side effect of memory loss. Grinker’s enthusiasm for the tech industry might also be more muted if he – as I have – witnessed his highly functional children squeezed out of creative opportunities because they enjoy collaboration. I am concerned that the logic of the industry, in cultivated the autistic, may be exploitative, rather than enlightened.

Finally, Grinker’s ambition for social accommodation – while economically feasible through whole-sale reallocation of military expenditures as evidence in Costa Rica – is a crushing burden for families currently living at the low end of America’s income scale. His failure to elaborate those realities is a gaping omission.

These criticisms should not detract from the excellence of Grinker’s examination of the history of stigma that prevents many sufferers from finding productive treatment. This book should be read by all mental wellness professionals.